We had one casualty in the recent storm... 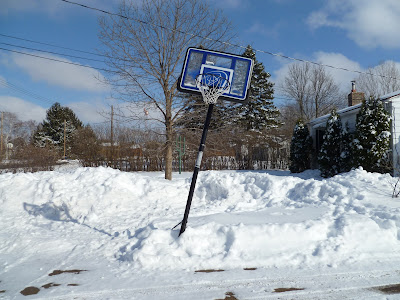 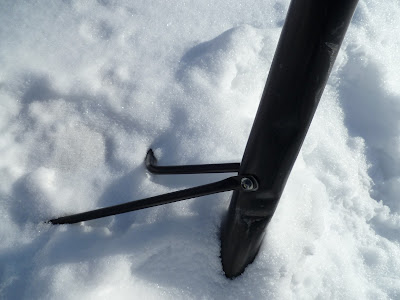 This is what happens when you hit a patch of ice hidden under a foot of snow! ABS goes crazy, and the hoop pays the price.  If you look at the dents and scrapes visible on the post in the second picture you can see that this is not the FIRST time it's been hit!  I'd like to point out that I'm only responsible for hitting it once (and not most recently!  LOL).  Thankfully the Yukon bumper is none-the-worse for wear...

Oh, and as a side-note, I LOVE my new camera for snow pictures!  It's great how the clarity and brightness makes me really feel like I'm outside.  Not bad for a point-and-shoot! :)
No comments: Links to this post

Tim (being the best husband ever!) bought me the best gift ever!  And, he has full intentions of using it frequently... to benefit ME! :)

Yes, that is a massage table.  Three 1/2 hour massages from my awesome hubby and it will have paid for itself. :)  And I don't even have to leave the house!
No comments: Links to this post

Here's another random post in which I write about many and various things...

First of all, someone pointed out that I said Phoenix sleeps from 10am-4pm.  He does, in fact, sleep from 10pm-4am as one would expect.  LOL  The last few nights have, sadly, not followed that pattern.  He wakes between 2am and 3am and then is restless and fussy the rest of the night.  He's had a pretty stuffy nose at night for a while now, and this morning started in with a cough because of drainage. :(  So sad.

On the homeschooling front, things are improving!  We'd had  a rough time of it with a lack of focus on the boys part.  Over our Christmas/baby break Tim sat down and went through everything to really familiarize himself with what we were doing.  Since that time school has been progressing at a much more satisfactory rate.  I'm thankful for the involvement of a supportive husband/dad!

The weather lately has been, well, strange.  It was VERY cold (below zero) for a spell.  Thankfully, during the cold snap, the skies were blue and the sun was shining!  The end of last week we had a warm up.  The snow completely melted off the driveway and the kids were able to get completely muddy while playing outside in snowpants and sweatshirts.  Today we are back to COLD and blue skies.  I'm am truly looking forward to Spring!

Speaking of Spring... the kids clearly have some sort of Spring/Cabin Fever.  They seem to get more crazy and out-of-control every day!  Since they don't really have space to run in the house they aren't getting rid of the energy they need to.  Sure would be nice to harness some of that!  But for now we just try to wrangle them as best we can.  It probably doesn't help that because of a lack of cooperation in the "cleaning the toy room" department they have virtually no toys to play with at the moment.  They do spend quite a bit of time coloring and drawing.

Recently Tim and I have spent some time purging the house of "stuff".  Mostly we've worked on paper... He had the day off on Wednesday and we were able to get through the shelves above the desk, an entire bookcase, part of a box, and two file cabinets.  We managed to pare down the contents of the file cabinets (a total of 4 drawers) into one (2 drawers).  That has freed up space in the family room.  The desk area looks better, though the actual desk itself is still in need of some TLC.  Overall we are pleased with the results.  I think we'll try to tackle a bit more this weekend since Tim doesn't have to work.

For the most part we've been able to stay healthy this winter, and for that I am VERY thankful!  Of course, for myself, having a baby and then having my gall bladder removed has been plenty to deal with!  There have been a couple rounds of throwing up that have passed through the house, though Tim and I managed to miss out on the fun.  I am ever so thankful that Phoenix has also stayed healthy!

Next month is testing month for the boys... we will again be taking the Peabody Assessment this year.  I like the format of the test, and it really seems to be a good fit for the boys as well.  They actually look forward to testing!

I feel like there was more I was planning to share, but between a lack of sleep, and the current activity level in the house, I'm not able to remember.  I guess this post is probably long enough anyway!  (If you made it this far, thank you. *grin*)

Oh, we got a new digital camera with our Christmas money and the new SD card should be here today!  Then you can look forward more pictures soon. :)
No comments: Links to this post

Well, two months and one day since I'm a few minutes late posting this... :)

Phoenix is such a great baby.  He has some periods of inconsolable crying on occasion (like this evening...) but for the most part he is happy and content.  He sleeps most nights from 10am-4:30pm.  He smiles easily and is beginning to babble.  We are enjoying watching him grow and change each and every day.  I have such a hard time believing it's already been two months!  But then again, he's just so right, it feels like he's always been here. 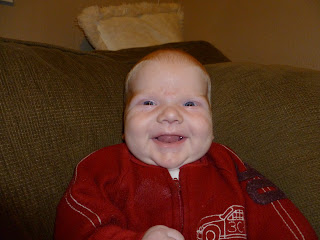 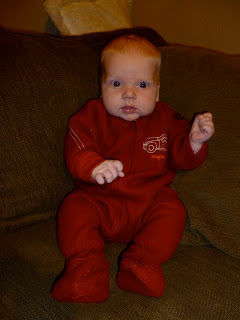 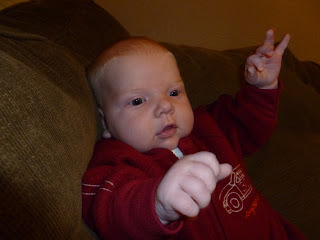