Officially on the Market

Today we signed the paperwork to put the house on the market.  What a relief to have that step in the process completed!  The stress factor now comes from the need to keep the house clean and show-ready while still living our lives... with 8 kids... in the house 24/7...

Listings can be viewed here at the Coldwell Banker site, or at johnpearsonhomes.com under "Featured Listings".  Our house is on page 2 (the address is 2822 22nd Street South). If I'd taken the pictures myself I would have moved some things out of the way. LOL  Somehow what looks okay in person looks much more cluttered in a snapshot!  Oh well.  Someone is sure to love it. :)

Please pray along with us for a QUICK sale!  We know God has a buyer in mind, and ultimately the timing is His not ours.  It's tough not seeing the big picture! But we trust that He has a plan that is best for us...

Such an exciting time in our lives!
No comments: Links to this post

Good day for the pool to come out since feels like temps were over 100 degrees. Even TJ got in on the fun. He enjoyed it - smiling and splashing - until he did a "faceplant" in the water.
First pic was after the faceplant. The last pic was after I asked if he was happy and he shook his head emphatically yes. :) 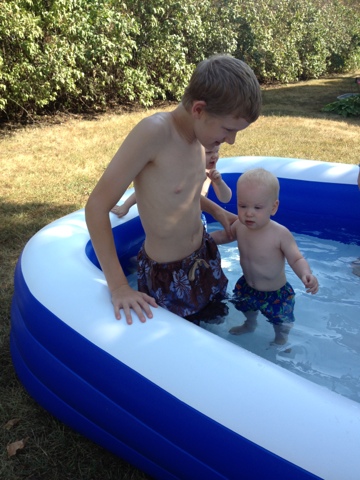 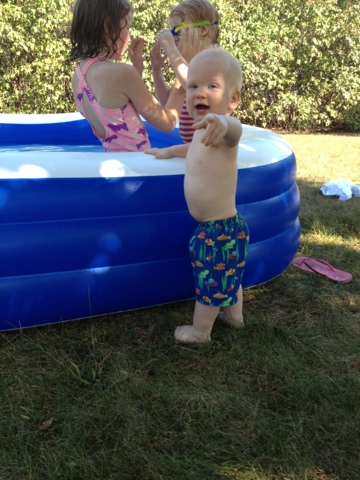 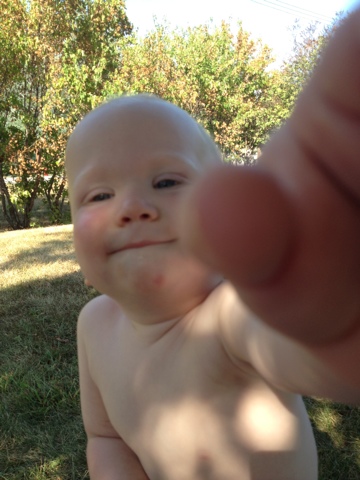 Thanks to the graciousness of my parents who are ever giving of themselves for their family, Tim and I were able to complete many of the painting and repair projects on our extensive list over the long weekend.  The fix it/paint it list is very short at this point... it's my cleaning list that just keeps growing! Yikes.

One of the major areas we painted while the kids were gone (out of necessity) was our bathroom.  Since we only have the one, there was no way we could get that done with everyone in the house.  It was awkward enough having no doors on the bathroom for the entire weekend with only the two of us in the house. :)  The other two major areas we completed with kids out of the house were the desk/office area of the living room, and the "toy closet".  Both were emptied completely and given a fresh coat of white paint.  Now they are put back together and looking much better!

All of the doors (interior and exterior) have been repainted.  Most of the living room was repainted and the rest retouched.  The dining room was painted.  The kitchen was painted... Are you sensing a theme? ;)

Some repairs have been minor, a few others major.  Thankfully, overall, the projects have gone smoothly and quickly.

Hopefully, we will soon have a sign in the yard... and would you pray with us that very soon after that we would have an offer in hand?

As is often the case with projects around here, "before" pictures are forgotten until projects are already begun.  I know I have pictures of most areas of the house in their "before" states... it's finding them that's the problem!  Somehow the "after" pictures don't seem as impressive if you don't know where we began.  Suffice to say, the old place is looking much better after it's facelift.  We did this one other time several years back and after fixing things up we decided the house wasn't so bad and we could stay for a while.  That isn't an issue this time around. ;)  While we will certainly enjoy living in a nicer environment for a while, we will be so thrilled when it sells and we can move to our new place!