Rule:  ALWAYS shut the gate to the basement and entry.
Lesson Learned:  When the gate is left open, small ones are likely to fall.  Phoenix nearly took a tumble.  Jericho did.  Levi's description was that she flipped all the way down.  After a trip to the ER and a scan, as well as a visit to the chiropractor, she was finally declared "okay".  But, she had a concussion.  Thanking God that the scan was clear.  I don't get too freaked out when my kids get hurt, but she was acting so strange, and throwing up, and I was VERY concerned for her.

Rule:  Don't play in the woodshed.
Lesson Learned:  Levi chose to disobey that rule.  We had an old, empty cable spool stored in there (on it's side, so it rolled) and he decided to play on it.  In the process he fell backward and hit his head square on the edge of a granite block leaned against the "wall".  There was much blood, but after cleaning it up we determined the wound wasn't that deep.  He sat with an icepack for quite a while, and was pretty subdued the rest of the day.  The next morning he started throwing up.  After a day of that, with TWO visits to the chiro, I finally gave in and took him to the ER.  Another scan.  No damage, but was diagnosed with "post-concussion syndrome".  I can't even begin to count the number of times his head has been bumped since then... makes me so nervous!!  But, again, thanking God that all is well.

Rule:  Stay in our yard unless you've asked permission to go elsewhere.
Rule:  Please, don't bother the neighbors. (this is not a safety issue, more of a politeness issue...)
Rule:  Don't bother the neighbor's dog when he's tied up.
Lesson Learned:  Shiloh came home crying (but not hard) with blood on her arm.  I took her arm from her sleeve, and immediately covered it back up and gave her specific instructions not to look at it.  The next thing I did was call Tim at work and tell him to come home, NOW.  Next call was to the clinic, to determine if I needed to bring her there, or to the ER.  We were told ER because if she got hysterical or was in too much pain they would have stuff they could give her.  She was SO calm the entire time.  It was kind of unreal!  We waited over an hour and a half for a room.  Finally, we were brought back.  All they did was clean the wound, do an x-ray, and send us home.  She's been a real trooper about the whole thing, but the dog bite is sure to leave a lifetime scar.  The only time she almost cried was when they injected the wound with lidocaine to numb it.  Now we have to change the dressing every day and she's on abx to head off any possible infection.  They don't stitch bites because of the risk of closing in an infection.  (I do have a picture Tim took before they cleaned the wound... I'm sparing you, but if you'd like to see it, let me know and I'll email it to you...  I think that of the two people that actually read my blog, one of them has seen it, and the other doesn't want to.  You're welcome, mom!!)

We are always telling our kids that we make rules to help keep them safe, NOT to be mean.  The prior examples all happened recently in our home (the last two were both in the last 7 days).  I've officially declared that no one is allowed to get hurt and go to the ER until NEXT year... at least!!

I should add, our Heavenly Father does the same for us.  The "rules" he has for us are meant to keep us safe, to guard our hearts.  It's a great reminder.

As for our home, I hope the next several months are MUCH less, um, dramatic.

Speaking of drama... Shiloh, who didn't cry at all about the bite, started crying and whining when I tried cutting her toenails this morning.  I told her she was not allowed to cry about that because I KNEW it didn't hurt... and if the dog bite didn't make her cry, there was no way she was that big of a wimp.  What a little turkey!  LOL
1 comment: Links to this post

Chase turned 12 on Oct. 22. He's been 12 years of interesting. ;) One of his best traits is his heart for and willingness to care for his siblings. He is almost always willing to lend a hand. He's a bit of a dare-devil (I'm a little surprised he's never broken a bone) and is generally willing to try anything once. I look forward to watching him continue to grow into a young man. 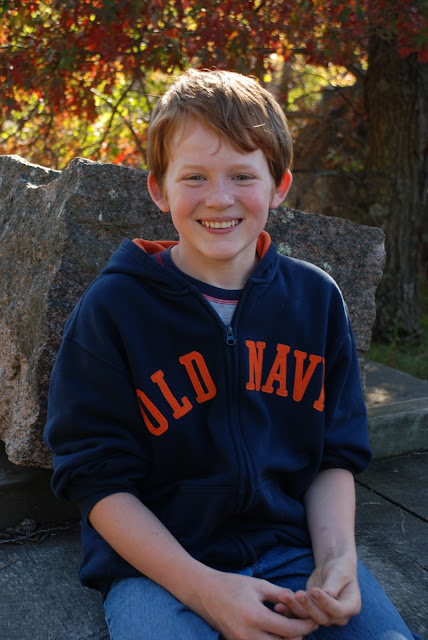 Phoenix reached 10 months on the 16th.  I took more than 40 pictures trying to get one good one.  None of them were super, but a few show his personality. :) 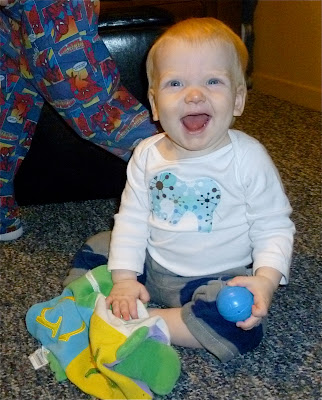 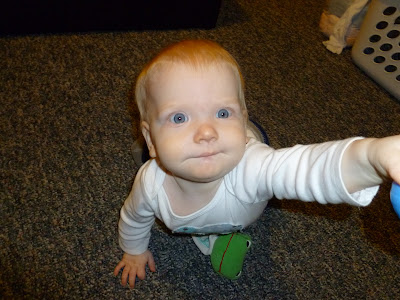 This is slightly unusual... he's so busy he doesn't often snuggle (this only lasted a few moments) and he also doesn't use a soothie.  But, for some reason, he felt the need for both at that moment. :) 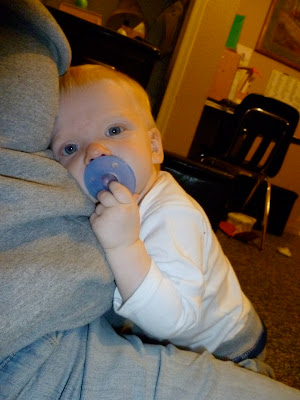 He's a big ham... and LOVES it when he can get his hands on the remote!  He stood at the end of the ottoman and popped up and down off the floor for a while.  Every time he would pop up he'd give me a silly little grin. 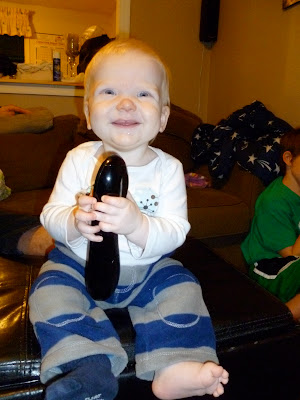 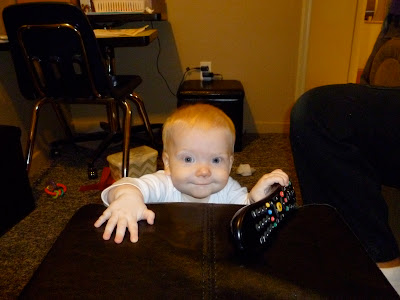 He sucks those same "best" fingers that I did as a child.  Usually he does this when he's getting tired and ready to take a nap or go to bed (these were all taken at bedtime).  Love it when he grins at me around those fingers. :) 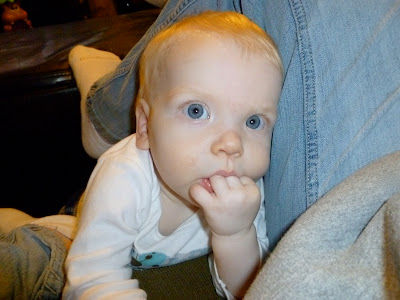 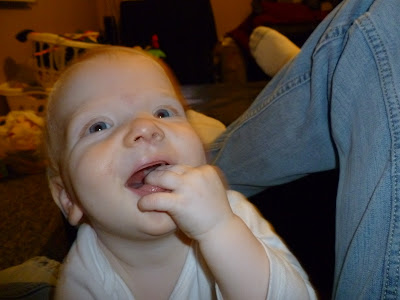 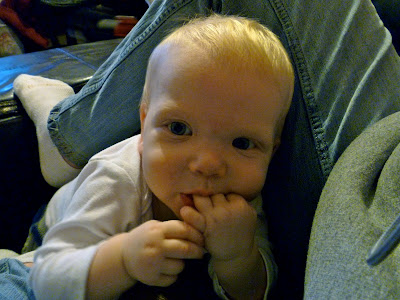 He also has this sweet little cowlick that is almost always sticking off his head.  It's absolutely adorable. ;) 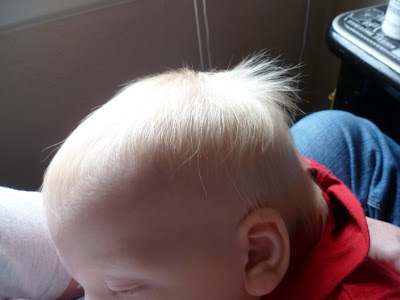 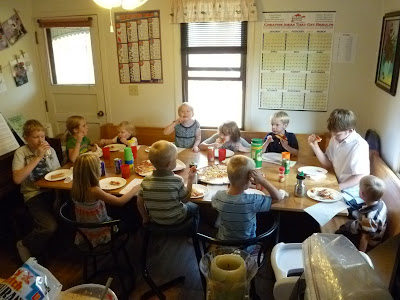 *******
Finally, these were just too beautiful not to share.  Fall is my absolute favorite time of year!  These colors are just one of the reasons... 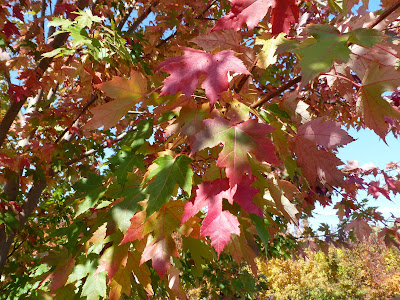 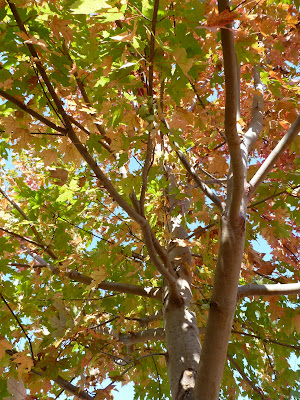 There's always someone crackin' a joke around here.  Tonight it was Tim.

Phoenix hasn't been feeling all that well for a few days (cough, runny nose) and tonight after supper he'd had enough.  He started puking.  Just as we'd start thinking he must surely be done, he'd start again.  For supper I fed him prunes (among other things).  He's been a little "irregular" lately and had some tummy problems.  I figured the prunes would help.  Here's the comedy...

Tim: (after PJ puked all over Tim and himself) I thought those prunes were supposed to work the other way.

Hoping and praying that now that PJ is sleeping he will not be sick anymore.  Also on that list is the wish to NOT have to change any clothing or bedding during the night.

I looked out the kitchen window this evening to spot Alex just as he rolled out from under the side of the van.  My response?  I called out the window, "Um.  Alex?  Just because you CAN, doesn't mean you SHOULD!"

Tim pointed out that those words are applicable in so VERY many situations.  LOL

Maybe I should make that the new family motto?  ;)
No comments: Links to this post

All the kids seem to have grown by leaps and bounds this summer... must be all that fresh air. ;)  Today, I was able to score some good deals on pants at Goodwill.  For Phoenix and Levi I was able to take advantage of the Blue Tag Sale (50% off).  PJ now has a cute pair of Wranglers, a pair of OshKosh bibs, and a pair of Gymborie black corduroy bibs.  Levi has a pair of slightly worn (but no holes) windpants, and a pair of jeans.  $1.50 each, except for the Gymborie bibs which were $2.

I was also able to find 3 pair of boys jeans without holes in the knees (a rare commodity in this house!) that I hoped would fit either Alex or Chase.  Two pair fit Chase, and the third was perfect for Alex.  They weren't on sale, but still only cost $3.99 a pair.  Chase is notoriously hard on pants, so it's good that TWO fit him. :)

Now, the big task for the coming week is to go through ALL the kids clothes and make a list of everything else we need for the winter.  I'll admit, I'm not really looking forward to tackling this job, but it will be nice to have it done (until April or May...).
1 comment: Links to this post