Cold is a relative thing ya know....

The first picture was taken sometime this summer, but is a pretty good representation of how my kids keep their shelves in the "toy closet".  The second picture was taken just a few days ago.  The four oldest each received fabric bins for Christmas with the intention that they would use them in this area.  We also did a HUGE purge and removed most of the toys from the house (at least for a season).  When it's proven that this area can be kept up the way it should be with a few items, we will add in a few more. For now, I'm pleased with the result. :) 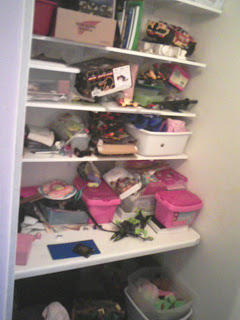 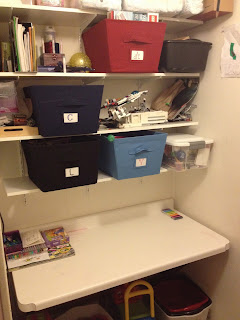 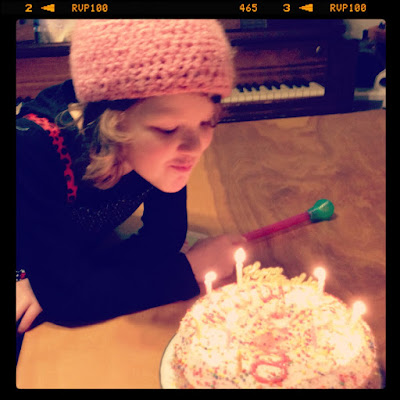 Today, Victory Joy Noel turns 8!  We celebrated her birthday on Tuesday with Grandpa and Grandma Osell with a meal at Perkins, and then a pink "donut" cake at home. ;)  The cake was a hit! 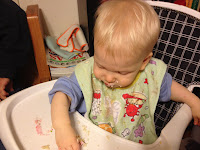 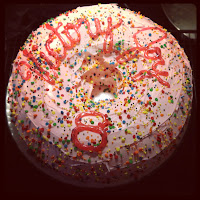 At 8, Victory:
* is 4ft. 3in. tall and weighs about 53lb
* is learning to read
* enjoys all things pink and girly
* loves to wear dresses
* looks A LOT like her mother!
* likes to help with the baby
* wants to be a princess when she grows up ;)
* likes ponies
* talks A LOT
* is sugar and spice... but does have a curl in the middle of her forehead!! 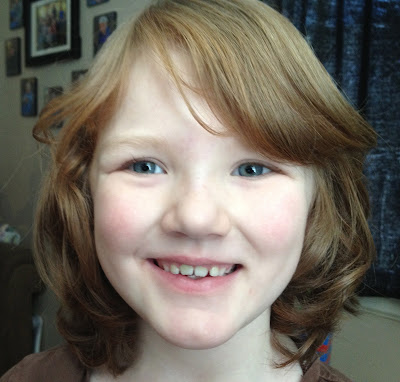 When I complete what I'm doing she says (in a voice that says she is just SO proud of me - or maybe it's surprise?? LOL), "You didn't cut youself!!"  Makes me giggle every time.
3 comments: Links to this post

Sometimes in life it's just better to do things for yourself...

Earlier today I asked Chase to pour me a glass of Dr. Pepper. He did. I thanked him.

Fast-forward about 5 hours. I checked the fridge to see what leftovers we had for supper. What I found was a large, wet, sticky mess of spilled soda and a half-empty 2 liter bottle. Now, I'll admit that the fridge needed a good cleaning, but I generally like to do things like that on my own schedule. *sigh*

Ten minutes, many saturated paper towels, a damp rag, and a helpful husband has the fridge looking much better. Next time maybe I'll not be so lazy and get my own beverage. ;) And if a kid does it for me, there will be reminders to check lids!
No comments: Links to this post

Today is the first day of Phoenix's second year.  I can't believe how quickly time has flown by!  I say that with every child, but it really never ceases to amaze just how fleeting it all is!!

At ONE Phoenix is becoming quite the ham.  He seems to enjoy teasing others (and the response he gets from that teasing!).  He pulls his sisters hair, and smacks his brothers. If you ask him to give you something, he will hold it out and pull it away just as you reach for it.  This is usually followed by his silly little giggle, or at least his classic grin...

He's still not sleeping through the night... most of the time.  Every few weeks he will bless us with one sold stretch from 11pm-7am.  I'll take more of those, please!  He takes one nap late in the morning that usually lasts about 1 1/2 - 2 hrs.

Phoenix eats like a horse!  For supper last night he consumed a jar of meat mixed with a jar of veggies and some baby cereal, a jar of fruit, most of a scrambled egg, and some shredded cheese.  After that little feast, he also nursed.  The boy also likes to share food off my plate, eats crackers, and is in general starting to eat more table food.  If he could just grow some teeth, his diet could expand even more! LOL

Strangely, his weight is not reflecting his food consumption... at WIC yesterday he was down 2 lb. from his 9mo weight of 20lb. 7oz.  At the clinic today for his well-child check he was only 18lb. 2oz. Now, in the last two months he's had a cold, the chicken pox, and a puke virus.  He's also much more active.  All these things probably contribute to the weight situation...  I'll bring him in next month when Victory and Jericho have their well-child appointments and just have him weighed to make sure he's gaining, but right now the doctor is not concerned.  She feels he's just settling in to a more "normal" curve for himself after starting out so big.  And, as long as the rest of his development is right on, and he gains weight over the next few months, all is right in his world. :)

I mentioned his love of smacking his brothers.  He also has found an interest in the household pets... we are trying to teach him to be gentle. ;)  Radar (the dog) is very tolerant.   If he gets bothered, he'll simply get up and move.  Susie (the cat) tends to sit and take it for a bit - tail twitching all the time - and then smack him on the head with a paw. ;)  Unfortunately, she needs her nails trimmed, and last week she got him across the cheek.  All better now, but he looked pretty rough for a day or two.

His other fun experience this week was learning about electricity.  He is forever playing with the phone charger when it's plugged in... yesterday, it bit back.  But, it must not have been too traumatic since he was back to playing with it again within an hour.  Stinker!

While he walks around furniture, he doesn't seem to have any interest in actually walking.  Even trying to get him to walk with hands held doesn't seem to be his cup of tea.  I'm okay with that!  That boy gets in enough trouble as it is! ;)

I am looking forward to what this coming year will bring.  He will change and grow so much!  What fun. :)  So much to look forward to!


HAPPY 1ST BIRTHDAY, PJ!!
No comments: Links to this post

Went to Calvary's staff Christmas party last night. Kids were still up when we got home around 8:30p.m. but brushed teeth and went to bed soon after. Levi came to me this morning and said, "Did you have a good time at your party last night?" I told him I had, and thank you for asking. :) Then he said, "Did you get to see some of your friends there?" Why, yes, yes I did. LOL All of this was said in his *sweet* voice... the one he often uses when speaking to the baby. :) I love that kid!
No comments: Links to this post

Fact, or fiction.
Even I learned a few things reading this article. :)
Let me apologize here for the formatting of this post... I've tried several times to fix it and am unsuccessful.  So, read and enjoy, and please extend some grace for goofy layouts. ;)


How well do you know the story of Christ's birth? Between today's interpretations and the traditional reenactment of Christ's birth during the annual church Christmas pageant, the story for most homeschooling families usually goes something like this:

1. Mary is with child and travels with Joseph to Bethlehem on a donkey for the census.

2. After they get to Bethlehem, the innkeeper turns them away because there are too many people in town.

3. The innkeeper feels sorry for them and puts them in a stable.

4. Jesus is born and laid in a manger, and he never even cries.

5. The angels are present and announce His birth to the shepherds in the fields.

6. Finally, three wise men arrive on camels to worship Christ with their gifts of gold, frankincense, and myrrh.

Are these accepted "facts" really the truth about Christmas? According to the Bible, our final authority on the subject, they're probably not true for the following reasons:


• Mary traveled with Joseph to Bethlehem, but there is no mention of a donkey. She could have ridden in a cart or traveled in the normal mode of her day, walking. If they did have a donkey, it probably would have been used for carrying packs on the 70-80 mile trip (Luke 2:4-5).

• No innkeeper is mentioned in the Bible. It only says there was no room for them at the inn (Luke 2:7). Most likely, flashing signs that said "No Vacancy" were not visible, but the Bible doesn't confirm that Mary and Joseph talked to anyone to determine if the inn was full.

• Jesus could have been born in a cave, a barn, or even outside under the stars. The Bible simply mentions that he was born, wrapped in swaddling cloths, and laid in a manger. Since mangers are used for feeding animals, chances are He was near some type of livestock when he was born, but not necessarily in a stable (Luke 2:7).

• Mary was in the third trimester of her pregnancy when she traveled to Bethlehem, but the Bible doesn't say that Mary delivered the night she arrived. Jesus' birth occurred "while they were there," which could have been at any time after they arrived (Luke 2:6).

• Two of the first Christmas carols young children usually learn are "Away in a Manger" and "Silent Night." Although the words and titles to these songs allude to a baby Jesus who didn't cry, the Bible says that Christ was born a man and suffered in the flesh (1 Peter 4:1). Like most other babies when they are born, Jesus probably cried.

• The Bible doesn't mention that the angels were at Jesus' birth, simply that they spoke the good news of His birth to the shepherds in the fields (Luke 2:9-14).

• No mention is made to the number of magi who came to honor Jesus' birth. Three different gifts are referenced, which probably led to the assumption of three wise men. In addition, Jesus was probably two years old when they visited him, since the wise men did not arrive until the days of Herod (Matthew 2:1-16). After the magi visited Christ, verse 16 says they left by another way and Herod ordered all the two-year-old boys and younger to be killed in Bethlehem and the surrounding regions.

• Jesus probably wasn't born on December 25, since the Bible doesn't give the exact date of His birth. Different methods have been used to determine the date of Jesus' birth; however, like the date of His return, no one knows for sure.

This Christmas, why not establish a new tradition and take a few minutes before you exchange gifts to read the real story of Jesus' birth from Luke 2:1-20. Reading this passage as a homeschooling family will not only make for a more meaningful Christmas, but it will also keep the truth of our beloved Savior's birth accurate for future generations.
No comments: Links to this post