One of the things that happened while Tim and I were away at the MACHE conference last weekend was that Phoenix began taking more frequent steps.  He's been honing his skill all week, taking 2-5 steps here and there to get from one piece of furniture to another, and occasionally taking a few more steps (up to a dozen) to mom, dad, or a sibling.  Now, suddenly, this afternoon he has decided that walking is the way to go.  He is choosing to walk much more than crawl.  Look out world! ;) 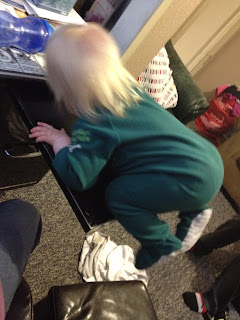 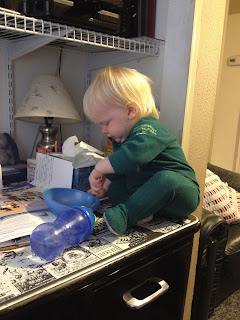 Little monkey was already quite adept at climbing...
No comments: Links to this post

We did something different for Shiloh than we've done in the past with our other kids.  We took her on a date to a place of her choice for her birthday supper.  After supper, we went shopping and let her pick out a few things for gifts. :)  She had fun, we had fun!  We think we'll probably make this some kind of birthday tradition for all the kids.  It's nice to have one-on-one time with them.
The gifts she chose (some with more influencing suggestion than others *grin*) included a bike helmet, Angry Birds stickers and t-shirt, plastic golf bag and clubs, and a real shovel (to use in the sandbox).

How did we get here!? 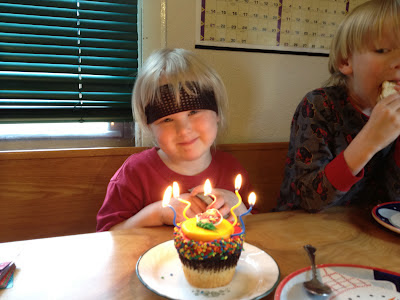 Today you are FIVE!  How did that happen??  Wasn't it just yesterday that this was you!?...
Since you entered our lives, they are rarely quiet... and rarely dull.  Happy Birthday, girl!  We love your spunk and the lack of boredom you bring to our lives. :)
No comments: Links to this post

While we don't always get formal schooling done on a day-to-day basis, I take some comfort in knowing that the "School of Life" is always in session!

Today, without any suggestion on my part, Victory decided she wanted to scrub the kitchen floor.  I said she could, but she needed to sweep really well first.  She did so without complaint and proceeded to not only do the kitchen floor, but then moved on to the entry, then the bathroom, and finally the dining room!

When she was done, Levi asked to scrub some walls...

Also, when Victory finished all the floors she (again without any suggestion from me) changed JJ's diaper and made sure she got dressed.  I think my little girl is growing up!

I guess they are learning something. ;)
No comments: Links to this post

MACHE... but not the paper type.  Tim and I are heading out tomorrow for a full weekend at the Minnesota Association of Christian Home Educators Conference taking place at RiverCentre in St. Paul.  We are praying it will be a productive time, and that we will come away with ideas, motivation, and inspiration for our own homeschool.

For anyone who's interested,  there will be a special (FREE) showing of a documentary entitled IndoctriNation.  This will take place on Thursday evening at 6:30 p.m. in Ballroom E-F at the RiverCentre and is open to the public.  The documentary takes a look at America's public education system.  Take a look at the MACHE website for more details.

The kids are excited to spend time with one of their favorite sitters (2nd only to Grandpa & Grandma *grin*).  Pray for her as she navigates a whole new reality. ;)  She will be staying at the house with them... it's so much less stress than packing them up to go somewhere else for the weekend! We will miss them all, but know that they are in capable hands -- and will probably be spoiled rotten by the time we get home.  LOL

While we are gone the kids will likely be enjoying this: 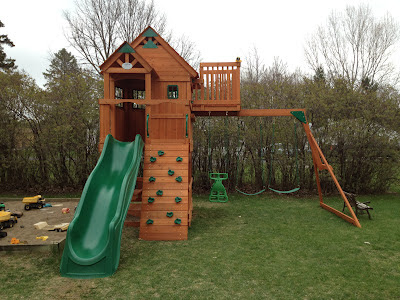 (More on this and a finished picture sometime next week.  When I took this pic we were still waiting on some missing hardware in order to attach the monkey bars.  They hang over the sandbox and were attached this afternoon.)

I had some thoughts today.  1) I do not blog frequently enough, and 2) Some of the stuff I *think* I should blog just wouldn't translate into cyberspace.

For instance... in the van on the way to the chiropractor today Jericho was saying "Dah-co Zahn" (Dr. Shawn) over and over again.  The way she says it makes you think of men in Chinese hats bowing to one another.  But it's just not nearly as funny typing it as it is hearing it!  Then, when we were leaving to come home, I finished buckling her in her seat and was just getting settled in my own when she whispered, "whe-dee" (ready), and again more loudly, "WHE-DEE!"  Both were said in her gruff 'monster' voice.  We cracked up all the way home...

Also, a few days ago Levi crawled in bed with us in the morning and promptly informed Tim that his head didn't smell right.  LOL  And he kept reiterating, "You don't smell right."  (Tim offered to let him smell his feet, but Levi said, "Da-ad", in his 'you have got to be kidding me' voice. LOL)  It was hilarious to us... but I'm sure it's barely mildly entertaining to any of my readership. ;)

So there you have it.  My life is hilarious!  (But maybe only when you're actually the one living it.  *grin*)

Oh, and since I probably won't get around to doing an Easter post, here's a picture... 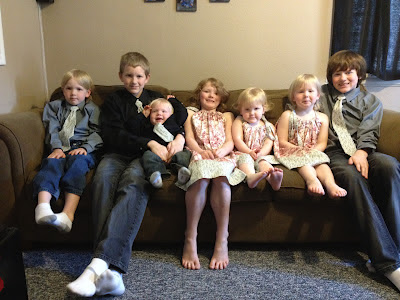 Phoenix was not too happy with the whole thing.  I wish I knew how (or had software capable) to do a collage so I could put up the entire sequence without uploading 14 pictures!  I made the boys ties... they match the contrasting fabric on the girl's dresses (which were made by my friend Krista at Shotsi Baby). 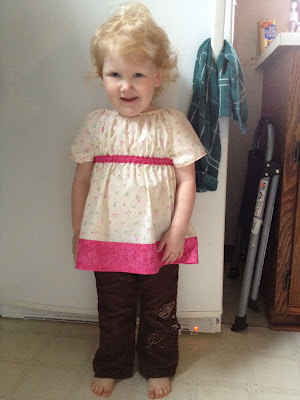 Isn't she sweet?  I made this peasant top after being inspired by this post at From an Igloo.  The tutorial is for the ruffled jeans, but I loved the top!  At the bottom of the post she does provide information on where she purchased the pattern, but I knew there were enough other free patterns/tutorials out there that I wouldn't need the pattern. However, if you would like to make this top and feel you need a pattern, now you know where to find it. :)

The tutorials I used to create my pattern are found here at Sew Like My Mom, and here at IndieTutes.  You may recognize these from the dress I made for a friend's daughter (shown in this post, after the totes).

Every item is a learning experience. :)  The fabric at the bottom was added because my initial pattern was too short.  I even remembered to take seams/hems into account this time, so I'm not sure what happened!  LOL  Now I'm wondering if this top might also fit Shiloh so she could wear it with the capris I made her?  She's a year and a half older than Jericho... and taller... but they have about the same girth.  In fact, I think Shiloh may be slimmer!  ;)

That's all for now!  I'm thinking I might make a little skirt or capris to coordinate with this top, but that will depend on time, and whether or not I have suitable fabric (or a good JoAnn's coupon!  *grin*). 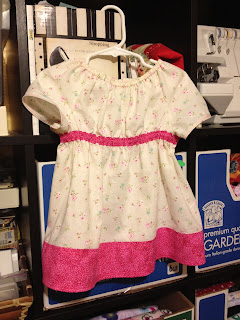