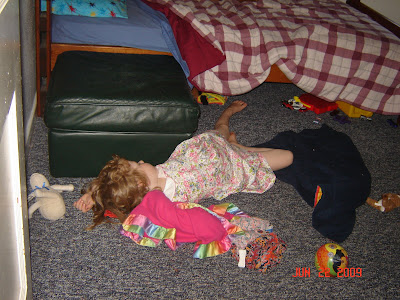 Victory was supposed to be taking a nap in Chase's bed. This is what I found when I went to check on her.

Oh, and I highly recommend checking out Steph's blog today. :)
2 comments: Links to this post

At 5 months, Jericho is getting ever more curious about the world around her. She is fascinated by anything that is put in front of her. She loves to be talked to, and loves *talking* to us as well as her toys. Recently I've discovered she enjoy sitting in a walker/exerscaucer as well as sitting outside in the stroller just watching her brothers and sisters play. 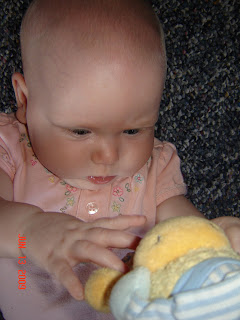 She smiles easily, but seems particularly taken with Alex. The only time she doesn't seem too happy with him is when he kisses her good-night... she almost always cries. LOL It's rather comical. :) 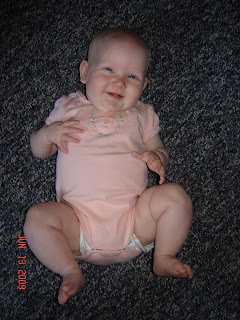 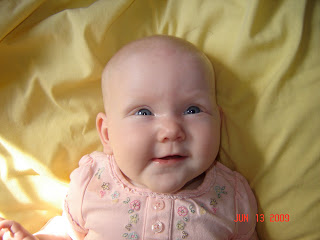 She is very interested in her hands. Her hands, and anything she can get a hold of. My hair, my glasses, faces, noses... It's very sweet, and she is very gentle. 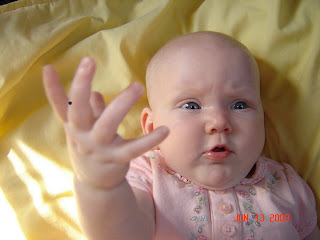 In other, completely unrelated news... I forgot to share a very interesting experience in my last post. The other night (just before dark) Tim and I were in the yard and he saw what he thought was a cat. We looked around, and I found a cat way out in the fields behind our house. Suddenly, something else crossed my line of vision. It was in the field directly behind our house. Nope... it was not a cat. Instead, it was a small fox. How cool is that?

Also, today I was outside cleaning up our exersaucer with the sprayer and I decided to have a little one-sided waterfight with the kids. They enjoyed cooling off from the spray, and also trying to get past me without getting wet. ;) We had a great time! Spontaneous fun is the best, isn't it? Just wish I would have thought to get some pictures of my little drown rats. LOL

I started this post before supper, and I'm just now getting around to finishing it at 12:50am. Off to bed I go! Hope you enjoy the pictures.
4 comments: Links to this post

It's dark, but it's the sound that makes it great. :)
And here's a photo Victory took today... I LOVE it!
The only editing I did was to erase the date from the photo. 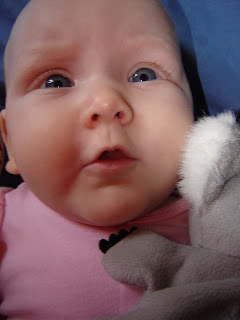 Well, if you made it past the title, you're in for a real treat! You get to see just how wild and random my mind can really be.

Last weekend we went up north. I had a wedding shower to attend on Sunday, and Tim had a bunch of trees to cut down at his brothers house. Tim and Bob started cutting but it ended up raining. They quit for the day, and Tim took Monday off from work to finish the job. I helped a *little* by driving the truck when the trees were ready to come down. Tim did all the cutting and clean up mostly on his own. I helped a bit on one tree. Levi "helped" a bit, and I think Chase made it out to help with one tree. His brother Dennis (owner of the trees) helped with one as well. The weather on Monday was perfect for cutting... cool, cloudy, and just a small breeze. Turns out, I like a man in a hard hat. ;) So, 7 trees in about 8 hours. Not bad for a days work! Of course I forgot my camera so I don't have any pictures...

This week has been a bit interesting. Levi had a preliminary hearing test a week ago and it showed some hearing loss in his left ear. I got all the info for his appointment with the audiologist and Dr. at the ENT, and filled out all the paperwork. Then, I got a call from the oral surgeon. When we had our dentist appointments in May Dr. McBroom saw what he thought might be a cyst on the roof of Chase's mouth. I'd noticed the bump, but thought it was probably just scar tissue from having oral surgery last year to bring a tooth down. That was one possibility, but we were referred once again to the oral surgeon. The call from their office came yesterday. Chase needs to go in for a consult and probably a biopsy. We would love to have you praying with us that this is nothing...

Tim is feeling sick and isn't sure if it's just sinus drainage/allergies or something more. Last night he went to bed right after supper. Bedtime with the kids is usually mostly Tim's "thing" so it was interesting doing it all on my own. Good thing I had practice from the week I spent up north without him! :) We even managed baths... although most of those were done before supper. Levi, who had been giggling and teasing me as he was put to bed got up and went to the bathroom. Unfortunately he had a loose stool in his diaper and took it off himself. Fun times! He still seems to be feeling fine, but had another loose stool this morning. I'm hoping it's just a 24 hour thing, and no one else gets it!!

Last night I came upstairs to use the bathroom just as Victory was coming out of her room. She beat me to the bathroom... Anyway, after she got back in bed she was kind of crying so I went in to tuck her in and see what was wrong. She said she was hungry. I was pretty hungry myself so I asked her if she'd like to have a cheese sandwich with me. We shared our "secret sandwich" on the front steps and had a little chat. I found out that she wants to be a mommy when she grows up. She thinks she's going to have boys and girls. 3 boys and 4 girls to be exact. And her first boy will be named Charlie. :) She thought it was pretty silly that I was going to be Charlie's grandma. LOL Even though it was 1:30 in the morning, I'd do it again in a heartbeat. It was very sweet to be able to sit with her, no interruptions, and talk about life. :) (Victory just came to me with names for her other kids... first girl will be Brownie. The other two boys will be Zebra and Alvin {Alvin and the "chickmonks" LOLOL}. The other three girls will be Giraffe, Horse, and Trala. Good thing name preferences change as you grow! Pray that's the case here. LOL)

My kids are a riot! LOL Speaking of kids, {oh, man, ROTFLOL... Victory just came back to inform me that "Dad is going to be my kids grandpa, and you are going to be their grandma, and their dad is going to be Theodore." To which I responded, "Do you know a Theodore?" The answer - given in a "duh mom" sort of voice?? "Yes! On Alvin and the 'Chickmonks'." Oh boy, my daughter wants to marry a chipmunk. LOL} Jericho will be 5 months old tomorrow! I just can't believe how quickly the time has gone. I'll get pictures of her up tomorrow. :)

And in case you're sitting asking yourself right now, "Huh, I wonder if they'll have more?", here's your answer... remember this post? And restated by my friend Courtney on her blog and pasted below. Their story is not exactly the same as ours, but I felt she stated my thoughts quite well.

Pro-life. To most, it simply means anti-abortion. In our family (and to many other families) it has a much broader meaning. After much prayer and research, we decided to take the plunge from being full quiver in principle to being full quiver in practice. What is "full quiver" you may be asking. Well, in a nutshell it is trusting God's sovereignty for the number of your family, welcoming as few or as many "arrows" as God chooses to place in your quiver. The name of the movement comes from Psalm 127:3-5.

Behold, children are a heritage from the Lord, the fruit of the womb a reward. Like arrows in the hand of a warrior are the children of one's youth. Blessed is the man who fills his quiver with them! He shall not be put to shame when he speaks with his enemies in the gate.

We have never believed in the use of any kind of hormonal birth control due to it's abortifacient properties(if that's news to you, please read here), but only recently did our use of natural family planning come into question. I began feeling very convicted about not trusting God with everything, including our family size. Chris readily agreed that it was contradictory to say that God is sovereign over all things but then turn around and try to control this area. We continued discussing and praying about it and concluded that we don't want to limit God's blessings in the form of children in our lives. On the flip side of that though, we also had to relinquish trying to conceive which in our case has been more of a reality.

So, we are believing God for His perfect size for our family. It's not the most popular thing to do in our society full of four person families, but we are called to be in the world and not of it. I challenge you to put this matter to prayer and search the scriptures for yourself. If you'd like more information about the full quiver movement visit quiverfull.com or the QuiverFull blogroll.

As for me and my personal life... I'm still struggling in many areas. I don't feel I'm being the most effective mom, wife, teacher I'm capable of being. There are days when I feel I'm progressing, and others when I wonder what I've gotten myself into. That's when I remember I didn't get myself into anything. This is the place that God has brought me too. And he will bring me through. As long as seeking to follow His will for my life everything will turn out fine. In fact, I know that since He is sovereign, it will all work out just the way He's planned.

Jericho has been pretty cranky and she's about ready to blow, so I guess I'd better quit my rambling and take care of her. It still feels like I have a lot more to say, but maybe I'll make it back tomorrow (after you've recovered from this post! LOL). Like my friend Steph, I compose lots of great blogs in my head. Most of them never make it any further than that. 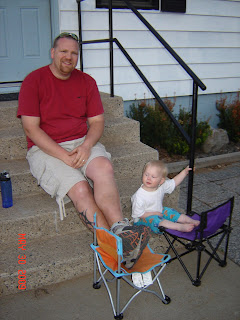 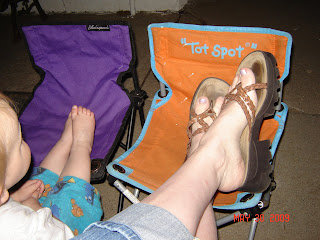 If I make the words tiny maybe they don't count :) Shi got the little chairs out and then had to immitate Tim as he used his for a footrest. The next shot is her being mom's pal. :) I love it!