Crafting for a Cause update

I've only managed to get 6 bags done so far.  However, I think they will go much more quickly now that I've made some slight changes to my process.

The first three bags are intended for boys.  Two are flannel, one is cotton woven.  The cotton woven is guitar picks, but I must have had an "off" day when choosing colors for inner and straps because it ended up looking a bit "Halloween-y".  Oh well, I'm guessing some child will love it. ;) 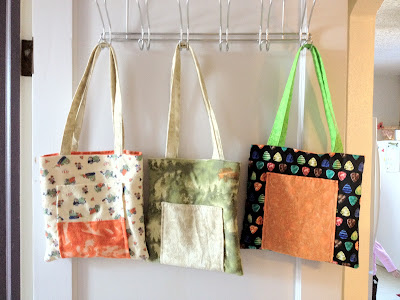 For my second round, I went with more girly prints (although the bag with the "bubbles" could probably be either).  These bags went together much more quickly.  I cut down the number of steps involved by making the pocket the entire width of the bag.  Also, there is only one pocket.  All bags are reversible, so depending on which way you use it, you'll either have a pocket on the outside or the inside.  (Two of the "boy" bags have pockets both in and out.)  I spent some time one evening cutting all the pieces for the bags, and the second evening I put them together.  Overall I spent about 45 min. to an hour on each bag.  If I continue to work on them I believe I may be able to cut that down to about 30 min. per bag, but we'll see. 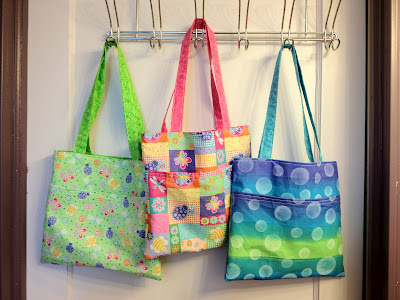 (As always, clicking on the pictures will allow you to see a larger version if you are wanting to see more details. *grin*)
1 comment: Links to this post

Crafting for a Cause

(**edited:  I realized after reading more closely that the cause is actually Craft Hope.  Project 16 is their most recent project.  I apologize for any confusion!**)

In the comments to my post "Pins and Needles", my friend Linda suggested I check out a great cause called "Project 16::The Littlest Warriors".  I did, and I've decided to make some bags to donate to this cause.  It just so happens, the mom that started this (a mom whose little one is battling leukemia) lives right here in MN.

So, what I'm wondering is this... are there others out there who would be willing to help me make items?  If you are local, we can fill a box (or more??) and send.  If you are not local, you could recruit your own local friends and send a box of your own.  Contact me through the comments on my blog, through email (qfmama@gmail.com), or by phone (282.4348) to let me know you are participating.

Specifically, Project 16 is asking for beanies and bags.  I'll be focusing on bags, as I am able to make those relatively quickly.  To get more details about Project 16, click on the link in the first paragraph.  Also, if you are unable to sew, but are willing to donate fabric, please contact me!

Recently I've completed several projects.  Last week I finished these two reversible bags for a friend.  Her fabric, my cutting/sewing. :)  She really likes them, so that makes me happy! I made so many modifications to each of these bags to make them work.  I made mistakes (cutting pieces the wrong size) that I couldn't "fix" because of lack of fabric.  However, I'm pleased with the final results. 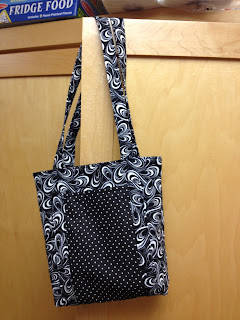 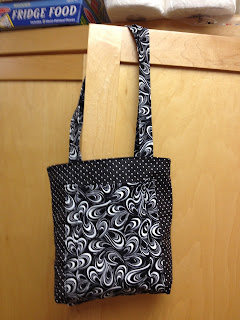 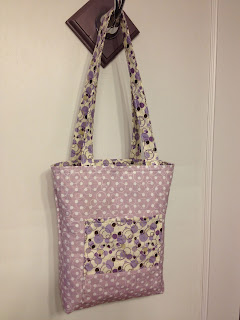 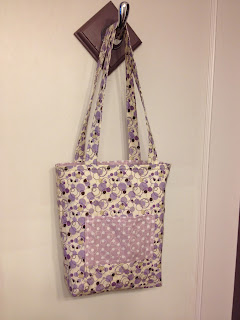 I also made this bookmark after seeing a tutorial online.  It was easy, but I really didn't have the right type of interfacing.  I hope it holds up!  What better way to use up the scraps left when trimming down the pocket pieces. :) 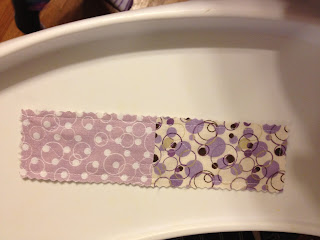 The next project was a cute little amigurumi bunny (free pattern can be found at Lion Brand.com by logging in and searching "best bunny").  I stuffed him with yarn remnants since it was all I had on hand.  If I were to make another I would wait until I purchased some "real" stuffing.  But, he's cute.  Now I just need to figure out what I'm going to do for the eyes since I don't think I have beads that will work, and I know I don't have any black/nearly black yarn... 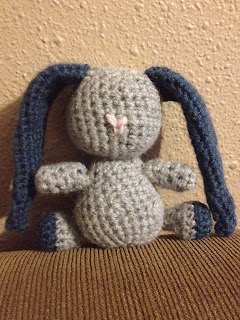 Yesterday was the day I really crafted up a storm!  It was the result of sorting dozens of links for tutorials and projects I'd like to make.  I just couldn't walk away!  LOL  The great thing is that every project was done with scraps left from previous projects. :)

My first project was a mini version of a bag holder.  It's much smaller than a traditional bag holder, but works perfectly near my desk where I really need a few bags, but don't want them just sitting out.  First of all, it would be unsightly.  Secondly, some small person would likely walk off with them... ;)  So, this is my solution.  Now when I'm ready to change out the bag in the garbage I can just do it!  (I'm always putting it off because it requires getting a bag from the entry closet, and I never remember to grab one when I'm out there...  Now I have no excuse!) 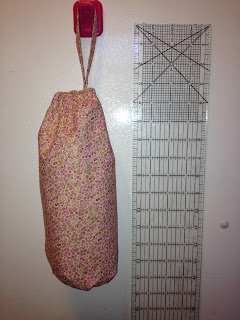 My second project was the little cutie shown below.  I found a tutorial for a finger pincushion, and thought it was a great idea!  So much better than holding pins in my mouth when removing them from a project I'm sewing; I can't just toss them on my work surface for fear they will end up on the floor, and then in little feet...  I didn't have all the necessary supplies to complete that particular pincushion, so I googled and found this one.  Very simple!  I did find that the finished product was a bit overstuffed to use on my pointer finger.  It does work on my ring finger or pinkie, but I'm not sure how practical that will be.  (I did make a second that you will see off to the side in following pictures. It's just slightly larger, and less stuffed than the first.  It fits perfectly!) 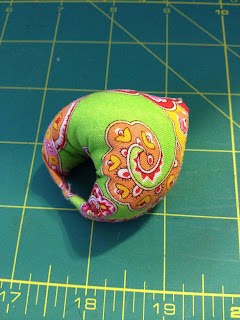 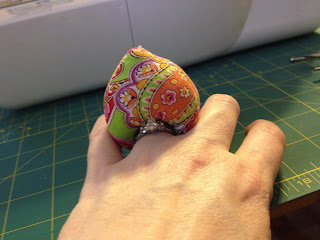 (A friend asked if I thought it would be hard to break the habit of putting the pins in my mouth.  I honestly don't know!   I never liked doing it, but did it out of necessity... I guess time will tell. *grin*)
Still on the pincushion kick, I made this square (about 4"x4"x2.5").  My current pincushion was a flower - cute, but collected dust like nobodies business, which drove me crazy! This may be a bit under-stuffed, but if I need to I can open up my side seam and fill it a bit more.  (And there's that second finger p.c. I made...) 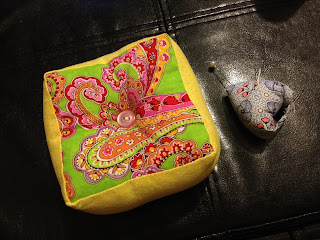 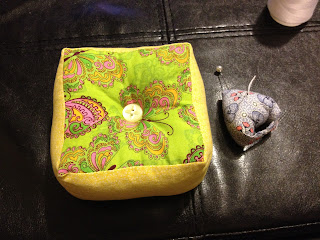 The last project was a bookmark made using this tutorial.  I made this for Victory from the remnants of the first project I attempted for her which was an utter failure for lack of thorough thought.  LOL  She's happy with the end result. :) 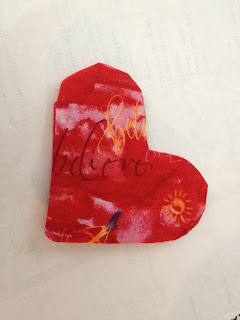 Now, what should I make next?? ;)  (Actually, I have another project in process, but it's taking a lot of thought - which I don't always have the brainpower for - so is moving slowly.  I will, however, be posting pictures when it's done!)

Jericho (recently turned 3) is a toughie when it comes to discipline. It's often clear she knows she's done wrong, but any form of discipline - from firm reprimand to spanking (yes, we spank. *gasp*) - results in tears of either deep sadness, or extreme madness. We are often at a loss with her.

Today she was scolded for playing with something she shouldn't. I said softly, but firmly, that she wasn't to do that. She hid under my desk. Normally I wouldn't allow it (hiding/pouting), but I did. About 2 minutes later she came out, gave me a hug, and said "sorry". I nearly fell off my seat!! Maybe a few minutes to stew is just what she needs?? I guess time will tell... :)
No comments: Links to this post