Especially if you leave a cookbook on the stove and turn on the wrong burner.

This is the cookbook with all my handwritten, family favorites.  Thankfully it's just the outside that's ruined.  Now I just need to find a new 3-ring binder with the same dimensions... 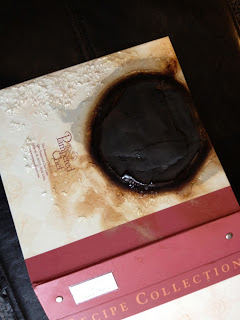 There wasn't an actual fire... just LOTS of smoke.  The smoke detector went off, the dog freaked out, the kids ran around griping about how badly it smelled.  I'm thankful the cover had a coated paper... had it just been paper, it would have gone up in flames for sure.

As if that wasn't bad enough, in the process of trying to clear out the smoke, I forgot to turn off the burner.  So, while I'm opening windows (which required peeling up weatherizing plastic) and doors, the remnants of the cookbook are continuing to "cook" on the stovetop.  GRR.

I am so thankful it was one of the very mild (nearly 40˚F) days we've had recently.  The house aired out nicely.

The stovetop and (barely functional) oven hood are now sparkly clean. Or, as sparkly as they can be.  This picture of the hood actually makes it look much better than it is...
My kids learned first-hand why I'm always telling them to NEVER put anything on the stove (unless you're cooking *wink*).

The upside of the day... the kids got out of the house for the afternoon (before the debacle) and worked together making this snowman.  Jericho and Shiloh helped too, but both refused to be in the picture. ;)

We had a busy weekend rearranging things in the house.  The piano is now OUT of the dining room!!  Yay!  Feels much more roomy.  We originally planned only to move the piano and rearrange things in the toy room.  We ended up doing MUCH more than that, and are very pleased with the results! 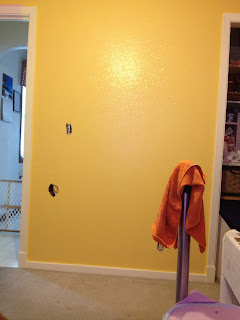 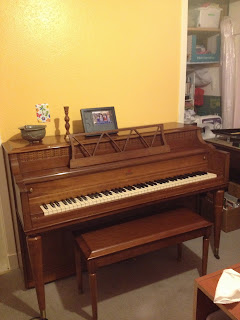 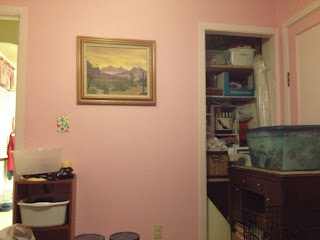 We painted just the one wall so it’s no longer pink (didn’t want to have to move the piano again to paint!). Nice improvement, huh!?  It was still bright pink (the photo doesn’t nearly do it justice!!) from when it was Victory’s bedroom!!  We plan to try to get one wall done each weekend.  By spring we could have a whole new house! ;)  Not sure if I can handle the entire room that bright, but I’m pleased with the result for now.  And the kids love it! 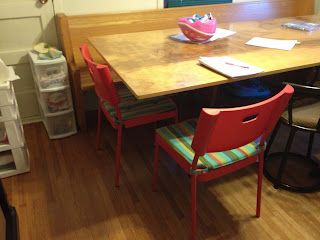 Got these two chairs on Craigslist.  IKEA!  The actual cost of the chairs and cushions would have been between $40-$50, but we only paid $15 for everything.  Yay for great deals!!  (It was funny because we’ve been using the piano bench as seating at the table and when we moved the piano Alex said, “Now where am I going to sit?”  LOL  So, we were kind and fixed that for him.  LOL) 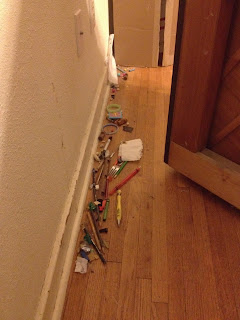 Look what we found behind the piano when we moved it!  Good grief!!  Those kids are such slobs.  LOL  And that's not all... when we re-ran the internet cable back to the living room we found a LOT of stuff (see pic below).  ALL of that went through the tiny hole with the yellow cable coming through it (just above the dustpan).  I don't know...  somehow that seems a *little bit* intentional!  haha 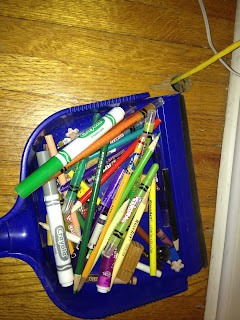 Backing up. Before all that rearranging occurred, we had to get what I've long referred to as "my scary corner" organized.  It's full of craft items, and fabric and sewing supplies.  Check out the "before" and "after" pics!! (I won't label them... I think it's clear which is which.  LOL) 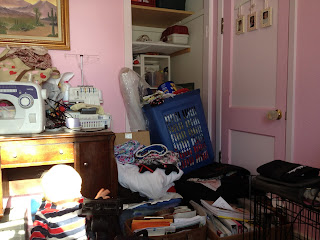 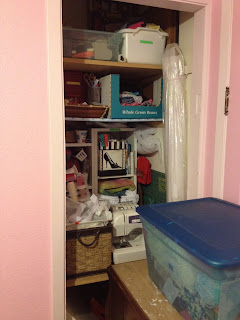 The following photo was taken during the clean out process.  That's fabric... and not all of it!  It's possible I have a problem.  LOL  In my defense, much of it was purchased when I was making cloth diapers.  And, some of it was not purchased, but given to me.  Still... I texted a friend this pic (along with pics of the rest of the stash) and she offered to find me a meeting. ;) "Hi, my name is Kristin, and I'm a fabricoholic."  LOL 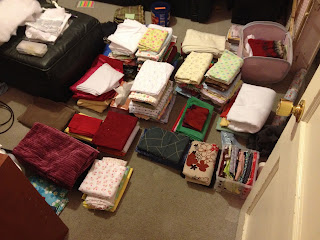 I don't know exactly who to give credit to for this photo... I found it on Pintrest, and this is the best I can do to track down an original: Found on FB with caption: "Hundreds gather to protest Global Warming....." By: Greg Vaughn

Steph T, I know you will particularly like this. ;)

P.S. I nearly spit out my Mtn Dew when I saw it.  LOL
1 comment: Links to this post

During school this week, Alex brought me an assignment and said, "I can read the first part of this two ways."


The instructions said:  Read Paul's message to the Greeks...

"Well, if you can find some in the next five minutes, go right ahead!" ;)

Needless to say, the assignment was done in the intended fashion.

A year of craftiness...

Last year (2011) I worked on several projects.  As I went back through pictures I was surpassed there were as many as there were!  This isn't even everything... just the things I remembered to take pictures of...

One project, that was started at least TWO years ago, was finally completed early in the year.  Alex chose the fabric (fleece) and we found a simple pattern to make a pullover hoodie with a pocket on the front. 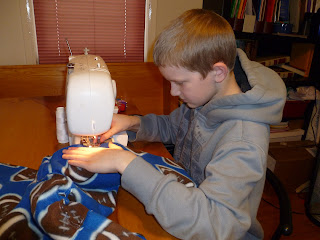 The size is nearly perfect, with enough "growing room" it should get him through this winter as well... and maybe even next fall?? 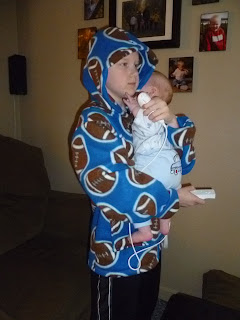 This was one of my more fun, and challenging projects!  My friend Steph needed a new bag, but had some really specific ideas about what she wanted/needed in order for the bag to function correctly for her.  She purchased the fabric, and I went to work.  The first bag ended up being just a smudge too small... but, she generously allowed me to keep it, and I use it all.the.time. :)  Thankfully, there was enough fabric (well, I had to make different straps for mine...) to make another bag.  This is what I came up with: 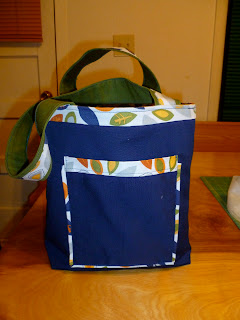 It's reversible... and I think she really likes it (I assume this, since she's still using it. *grin*). 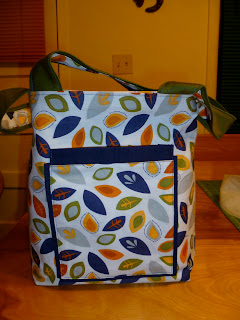 Here's another bag I made.  Originally I made it for myself, but then I realized it really fit the personality of my friend Karri, and I gifted it to her. :)  It is also reversible...  Both of these bags were made using my own modifications to this pattern, and this one. 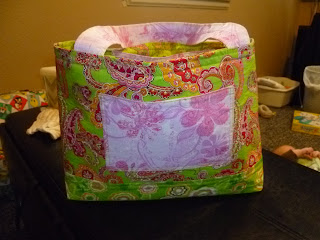 The curtains below were a project that was fairly simple.  After hanging the rod, I made the curtains long enough that they would hang on the floor a bit.  I used my snap press to set snaps along the top to make it easy to remove for washing (which reminds me...! LOL).  I let it hang in place for a few weeks before doing the final hem at the bottom.  The floor is not quite level, and I wanted to make sure the fabric had stretched before deciding on a final length so it wouldn't hang on the floor after it was hemmed.  That was probably the hardest part... I have a really hard time sewing a "crooked" hem on something!!  (Now, if you NEED it straight... haha... I'm talking about doing this on purpose...)  But, it looks great, and gives the kids sleeping area the privacy it needs.

I also made a curtain for the egress window in the basement, but that may have been before the start of the new year... and I'm pretty sure I didn't get pictures.  What started out as a plan for two panels ended up being one panel.  It's lined to filter out more light for better sleeping.  It also has yet to be hemmed... *sigh* 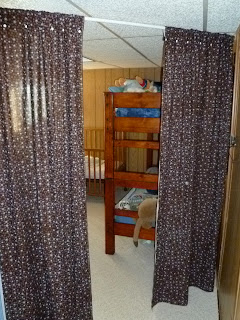 A friend loaned me a Boppy to use after I had Phoenix.  She had mostly girly (read pink) covers, so I recycled a laundry bag my mom made for me (when I was still in high school???) and made a cover that was more "boyish".  It had some fit issues, but works.  I just used the Bobby itself as a pattern.  Next time I might put a bit more effort into getting it right. ;) 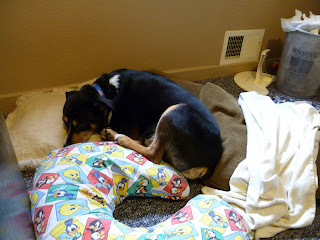 Not so much a crafty thing, but an attempt to allow more craftiness... I cleaned my sewing table.  Sadly, it currently looks worse than the first picture.  It never ends, does it? 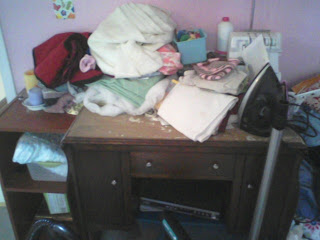 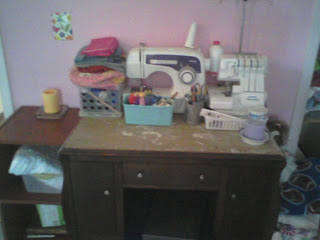 Victory loves to play "mommy".  I have several varieties of slings for my own babies, and Victory is always having me tie her blankets around her to use in the same fashion.  It never works quite right, and falls off quickly.  I finally made her one to use for her own babies. :)  I used a pattern I found here. 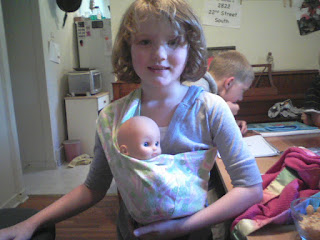 This fabric (along with a  coordinating fabric in red/cream) will become a purse for my mother... someday!  (Maybe I'll have it done by her birthday... in August.  LOL) I'm, again, basing the idea off a pattern I found online, but the end result will be much smaller and more "purse-like".  I also have an idea for the straps that I'm very excited about. :) 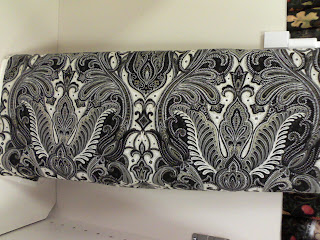 I receive a newsletter from Lion Brand Yarn and they often have ideas I'd love to try.  This pattern was called "Bebop Cardi".  I used yarn I already had and made this as a birthday gift for Victory.  Overall, I'm happy with the results.  I did find a few minor issues with the pattern that I would modify if I were to make another one.  But, the recipient was happy, so I'm happy! 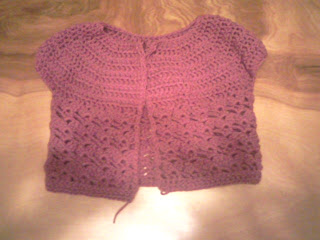 finished product on the birthday girl 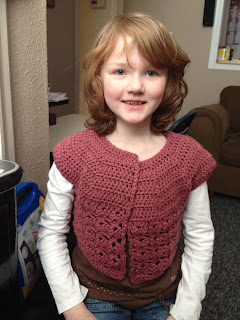 Earlier this fall a friend of mine delivered quadruplets.  They were MUCH too early (by the time their "due date" arrived in December, they were already 3 months old!!), and we continue to pray for their continued growth.  They are beginning to come home now, and are also able to wear hats and clothing.  I made these hats for them.  I wish the picture was better quality... sadly, this is the only picture I took of the finished project!!  But, it was fun to do something so simple for these precious bundles. 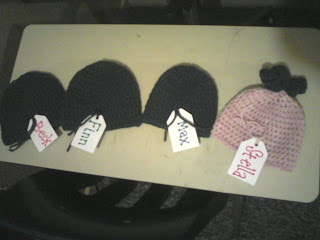 I'm looking forward to another year of craftiness!  I currently have a cowl in the works (not sure if that's a Lion Brand pattern, or if it's from Bernat...).  I also have a plan to work on the disaster that I call a "craft corner".  Perhaps if I can make some sense of the chaos, I can actually complete some already started projects, or even use some of the fabric that I've purchased for a specific purpose and get those projects done! :)