Last night Grandpa and Grandma took us to Pizza Ranch as an early birthday supper for Victory. Tuesday is 'Kids Eat Free' day at the Ranch, making it a more economical night to visit. :)

When we parked the van there were several large trucks used for clearing/hauling snow in the parking lot. When we left all the trucks were gone, but we saw this: 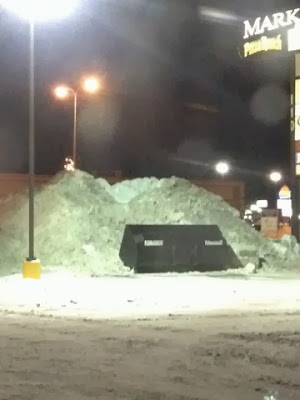 Shiloh pipes up as she's climbing into her seat with, "The truck is buried in the snow!!" Gave us all a good chuckle. :) The comment also made me wish I'd taken a picture of the trucks as we pulled in!

In other news, we are enjoying a brief warmup after several days of frigid temps. The kids have enjoyed going out to play.

Also, I mentioned previously that our house was on the market. Two weeks ago we had a showing which resulted in an offer. It's not ideal, but it's being considered. We've also had two open house's which were a total bust - not even one looker. Today was another showing. It's too early to know anything, but we've been praying for a full price offer. We sure would like to move - sooner than later! Continued prayer for the sale of our home is certainly appreciated.

Two final items: Temperance is ONE MONTH OLD already!! More on her later... She's very sweet ;) And, Phoenix had a birthday as well. Perhaps one day I'll get that post put together too...